skip to main | skip to sidebar

Something to blog about--and a little time to do it! 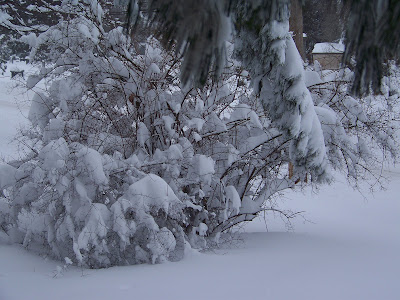 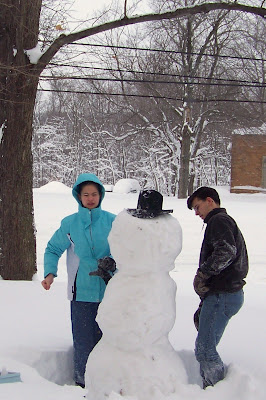 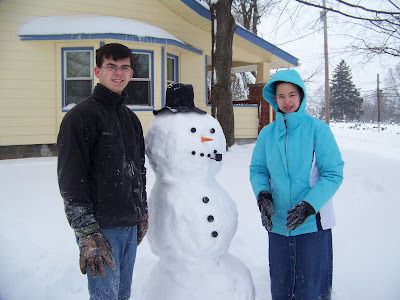 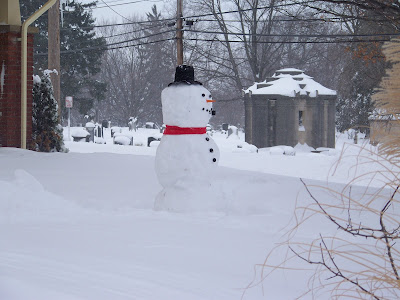 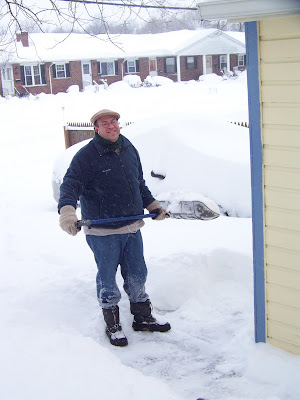 Well, I don't think this post needs many words. The pictures tell it all.
Posted by Steve-n-Deb at 10:24 AM 2 comments: 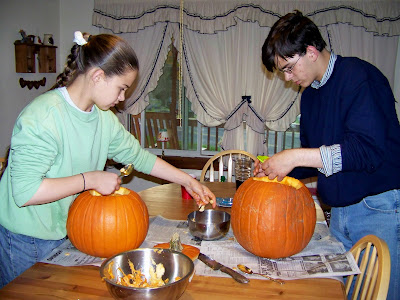 It seems like such a long time since we posted, and it has been. It just seems that life has been flying by. I keep wondering when things will slow down. We did take some time to carve pumpkins recently. We also invited a friend from church over for pizza and games. We laughed alot and that helped us to relax. Abby's classmate came over too. I should have taken some pictures but I didn't. We need to do things like that more often. The laughter and fellowship are good medicine for a busy life.
Posted by Steve-n-Deb at 9:08 PM No comments: 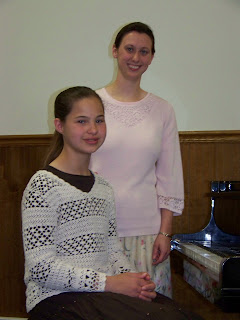 Abby played in her recital on May 21. 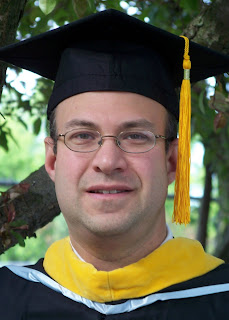 Steve didn't get to march in graduation at Institute for Creation Research Graduate School when he graduated December '07 so we did graduation pictures at the AWC graduation this year. 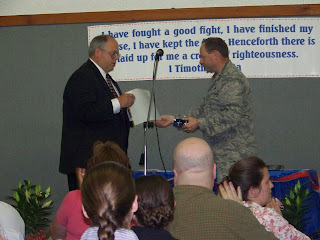 At the SWA Awards Banquet, Major Brad Forrider presented the school with a flag flown over Iraq by a C-130. 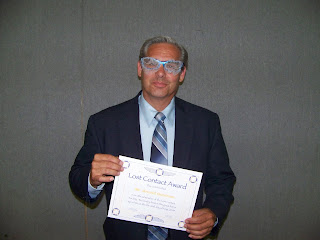 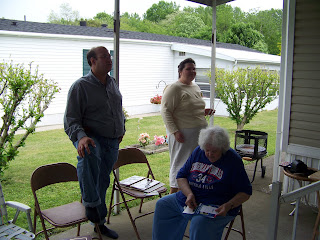 We visited Steve's Mom for a few days after school was out. We had a BBQ with his Mom and Aunt Glady 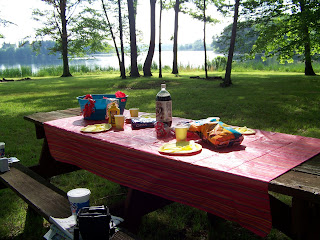 Mom's In Touch gave the teachers a picnic tub. We went to Salem City Lake for ours. Thank you MIT for the gift and the thought. 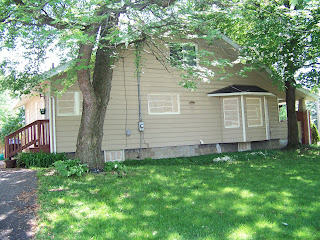 Our house is being painted. This is what it looked like when we left last Saturday afternoon. 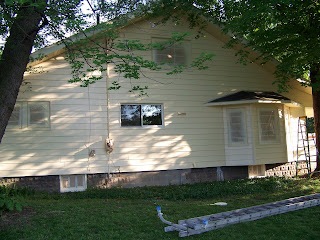 This is what the house looks like this evening. The trim and the final coat are not on yet, but we are making progress. Weather permitting, we'll have a new house (kind of) by next Saturday.
Posted by Steve-n-Deb at 9:57 PM 1 comment: 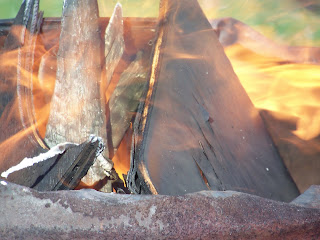 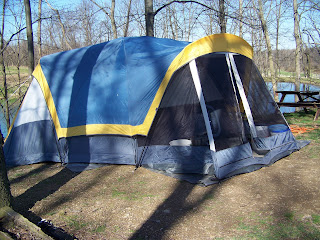 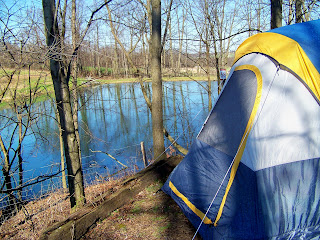 Continuing our annual tradition, we went tent camping. We decided to go the same place that we went last year for a couple of reasons. One was that the rates are very reasonable and the second was that that there seemed to be something for everyone to do. The place is in Winesburg, OH and it's called Amish Country Campsites. During this time of the year, the tent area is basically empty. This year it was completely empty and last year it was mostly empty. During the day, we visited some of our favorite places in Amish country and tried out some new places. We did spend late afternoon and evening at the campsite with a fire. Instead of bringing food with us we decided to buy local food. We went to Troyer's Trail Bologna and bought some Trail Bologna directly from their store. We visited Heini's Cheese Chalet and got some samples as well as buying some bricks of cheese to take with us. We got some baked goods at an Amish Bakery and some other supplies at Troyer's Market. It worked out OK but I think we may make some adjustments next year. Wednesday night/Thursdsay morning was very cold. Later we found out that it had gotten down to freezing. Thursday night/Friday morning was significantly warmer. I still like it a little warmer for sleeping but we survived. I'm going to try to add a few pics at the bottom of this post. Who knows where they will end up though.
Posted by Steve-n-Deb at 8:37 PM No comments: 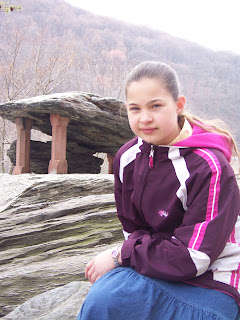 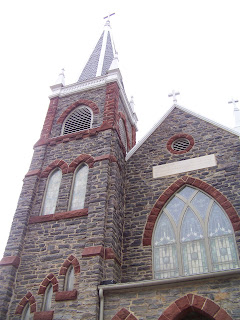 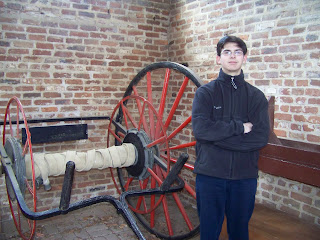 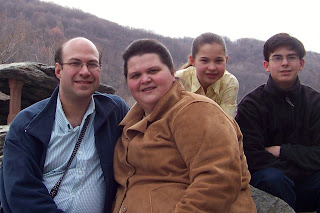 About a month ago we took a weekend trip to West Virginia and Maryland. Steve spoke at the Fairview Allegheny Wesleyan Methodist Church on Creation/Evolution. On Saturday we were able to spend some time with Steve's sister Glenna and his niece Annette. We went to Harper's Ferry. Here are some pics from that trip. There was a lot of history that happened in that little town. Abby has been learning about it this year in American History so hopefully this will help her picture it a little better.
Posted by Steve-n-Deb at 7:13 PM 2 comments:

Last night was the Science Fair at our school. Every other year we have it in late winter or early spring. On the years that we don't have science fair, we have Heritage Day and emphasize history. Once again everything seemed to go well. Some like it more than others but I heard a lot of nice comments. I'm sure that even though it's alot of work for the kids and parents and teachers there is a sense of satisfaction when everything is said and done. This year, the kindergarten class used a farming theme--there were even some live chickens! The first and second grade class had a jungle theme. Third and fourth used a breakfast theme and each of them took a different breakfast food and researched it. That room was probably the most popular because of all the samples. Fifth and sixth grade had a variety of projects but at this level they were required to use the scientific method to approach a topic and make a hypothesis, etc. The same rules applied to the jr. high and high school students. Steve's classes were required to choose a topic within the discipline they were studying. The Physical Science kids had to choose something related to Physical Science and the Chemistry students had to choose a Chemistry topic. The General Science kids did coordinating projects on fireworks. They used black lights to make a neat display. I think I managed to get pics of every student's display but I'll just post the two that I was the most involved in and one pic from a group that I helped out with. Congratulations to everyone--students, parents, and teachers for a job well done!! 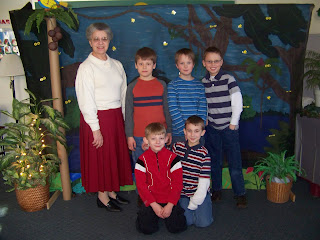 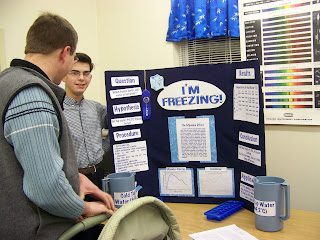 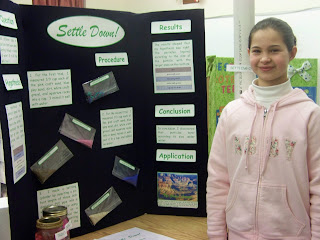 On Monday, January 26th we celebrated Chinese New Year. After living in Taiwan for 8 years we have several fond memories of New Years spent with our Chinese family. We have tried to keep up the tradition of celebrating here. Most of the time that means going out to a Chinese restaurant for dinner. This year we celebrated by helping Ron High Rock cook a Chinese dinner in the AWC cafeteria. It was a lot of work and a lot of fun but I had a lot of help. It was fun cooking when I had so many helpers and such a BIG stove to cook on. Steve, Stevie, and Abby came over after school and helped decorate tables and serve the food. We wanted more pictures but since we served the meal in courses, once we started there wasn't much time to take pictures. Below, you see the crab rangoons that were the first course and Ron and Debbie putting the finishing touches on the General Tso's Chicken. 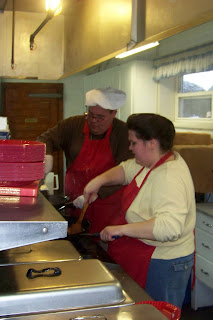 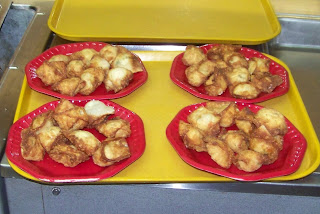 Check Out These Websites

Steve-n-Deb
Salem, OH
Two teachers, two kids, and one cat. All of us go to Salem Wesleyan Academy except the cat (although she has visited). One creationist, two scrapbookers/cooks, and one "resident genius." (If you don't get that you don't listen to Odyssey enough)